The Remedy for Love 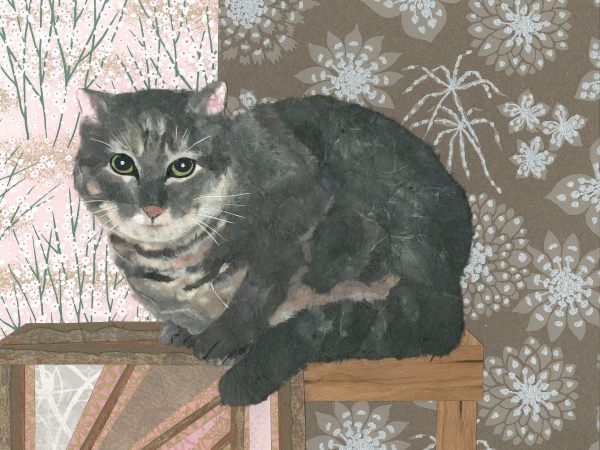 May 15th is a great day to make a donation to honor someone you love.  It is Give Big Day, sponsored by the Seattle Foundation, when contributions to over 1400 organizations will be “stretched” through a matching pool.  I am making a donation to Purrfect Pals in memory of a very special cat.  Please join me by giving what you can in celebration of someone who has made a difference in your life:

“There is no remedy for love but to love more.”  ~Henry David Thoreau

Along with the joy of living with animals comes the inevitable heartbreak of losing them.  Our companions never live long enough, no matter how well we care for them.  And when they leave, there is a huge hole in our lives.  Sometimes it takes a long time to heal.

A year ago today, I said goodbye to Possum, a gray cat who had been with me through the steep ups and downs of our fifteen years together.  I have loved many cats in my life, and like a good parent, I should not admit to having a favorite.  But I did, and getting over this loss remains an unfolding process.  I still reach for him in the early morning, and remember with a sharp pang that he is no longer here.

Poss was rescued by Friends of Campus Cats near the Mary Gates building at the University of Washington when he was just a few days old.  Sharon and Diana, the stalwarts of Campus Cats, managed to trap, spay/neuter, and release hundreds of cats at the U, but Possum’s mother eluded them until shortly after he and his siblings were born.  Three of them were strong and healthy, but Poss came close to dying several times.  He could not shake a tenacious case of coccidiosis, and by the time he was 4 months old, he had spent a frightening number of nights getting fluids at an emergency clinic.

People who have worked with animals know that ones who are gravely ill often develop an ethereal sweetness, and despite their weakness, are completely present.  Possum was like that.  I fell in love with him while I was volunteering with Campus Cats.  I didn’t intend to fall for a kitten with such limited chances, but how do we choose who captures our hearts?

And how can we predict who will survive, despite the odds?  By the time he was 6 months old, Possum was stronger.  Two months later, his devoted caregivers allowed me to adopt him.  I set up a room for him, and planned a thoughtful introduction to the other resident cats, one of whom could be a terrible bully.  In the middle of our first night together, I heard Poss crying.  When I opened the door to check on him, he slipped past me, ran right to the orange menace, and immediately disarmed him with a surprise head rub.  There was never an issue between the two of them, and over time, my gray boy proved to be quite the diplomat, always befriending new cats and facilitating easy introductions.

Possum in the window

Possum was a gentle observer, quiet, and sometimes goofy as he did mid-air back flips in pursuit of raffia.  He was also the most arboreal cat I’ve known, leaping from the floor to the tops of doors where he perched for hours watching the world below him.  I thought about writing and illustrating a picture book that would begin with the line, “My cat Possum thinks he is a lemur.”  It would portray him as the many animals he was: prairie dog, greyhound, bushtit, and in his later ground-bound life, turtle and toad.  The last illustration would explain why he was named Possum: as a puny kitten, he squeezed between his much larger siblings at the bowl, with only his long , skinny tail visible.  His rescuers thought he looked like his namesake.

That little runt grew into a gorgeous cat, long and lithe, with a velvet coat and almost comically small ears.  A veterinarian once asked me if he knew how handsome he was.  I responded that no, he was quite unaware.  She said that he was lucky because self-conscious beauty in any being could be a burden.

Possum and I lived through many losses together, and each of them brought me to a deeper understanding of unqualified love.  I could be a sobbing mess, and he never left my side.  He was a cheerful morning animal, and I started every day cuddling with him, rubbing his belly as he purred deeply.  I miss those moments the most.

Early last spring, something was clearly wrong.  Exams and blood work could not explain Possum’s increasing weakness and confusion.  When we realized he had suddenly gone blind, we suspected a brain tumor, but chose not to put him through extensive diagnostic testing.  It all happened so fast, and when he could no longer hold up his head, we decided it was time to schedule euthanasia.

I have said goodbye to more cats than I can count, and it is never, ever easy.  Before they die, I think of those cats who have gone before, and I ask them to help the others cross over.  Before Possum died, I could not even conjure the images of his predecessors.  Their world on the other side of mine was silent, closed.  I felt empty, and somewhat panicked.  I needed their help to ease this transition for Possum, and for myself. 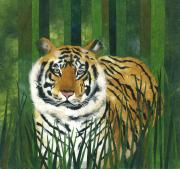 The night before our scheduled appointment, I slept on the couch to be closer to Poss in his basket.  He did not even seem to know I was there.  Just before dawn, in the liminal space between dreaming and waking, I sensed a large feline presence next to me. It was a tiger, a healthy young male.  I asked him for help, and he responded that if I could hold Possum close to me while I followed him into the darkness, he would make sure my gray cat passed safely.  When I finally woke in the light of mid-May, I lifted Possum into my arms, and we began our last few hours together.  I assured him that he would be alright, and I almost believed it.

I can’t deny that it was a rough passage.  My gentle cat, unable to move when I carried him out of our house, surged with energy and fought until his big heart was finally still.  A friend suggested to me that it was tiger energy, that he had begun his journey into the unknown with a roar.  A few months later, I began a series of portraits with the image of a Bengal tiger.  Then, I created Possum, and finally the two of them together, Poss glancing over his shoulder at me one last time.  It is the strongest artwork I have ever done.  It was the beginning of my own passage into a new chapter of life.

A year later, I have vivid images of not one, but two cats to remind me to be both gentle and strong, and to love fiercely.  And I think of my favorite Thoreau quote.  It is a homeopathic remedy: treat love lost by loving even more. 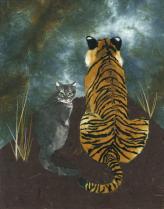 Possum and his tiger

Shortly after Possum died, I sent a donation to Friends of Campus Cats to thank them for bringing the best cat ever into my life.  Today, I am making a contribution to Purrfect Pals.  I am paying forward in gratitude for a cat I have not yet met who will fill my life with joy.  I will never replace Possum,  but there is too much love in this heart not to share it.