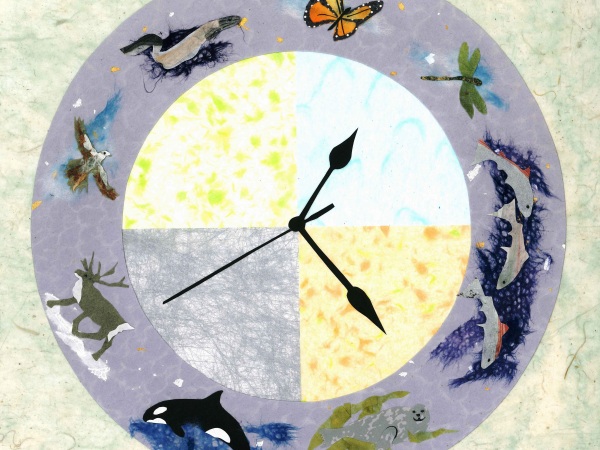 “Our task must be to free ourselves… by widening our circle of compassion to embrace all living creatures and the whole of nature and it’s beauty.”
-Albert Einstein
A year ago today, just before Thanksgiving, we said goodbye to our Siberia cat. Only 14 months old, he was lost to us when the FIP virus took hold, and he joined his brother Jaguar after a short time of living between worlds. This Halloween, we mingled their ashes, and gave them a resting place under young birch trees in our back garden. They joined the circle of other cats who passed before them, with river rocks on each grave, and a pole at the center commemorating the best cats ever, truly loved. Letting our tears flow once again, we set them free.

Back in the house on that bright, bitter afternoon, we were welcomed by curious cats with paws mostly in this world. Our old man Finn is fading, but he still loves to cuddle and eat, his purrs rumbling through his frail body. It amazes us that a cat who has been through so much still greets the morning with enthusiasm. Sam, Siberia’s best friend, has matured into a handsome, plush cat with a tail that curls joyfully over his back. That attribute has earned him the nickname of Teapot. Unexpectedly, our goofy Teapot occupies the role of alpha cat.

Max, who came into Sam’s life while he was mourning Sibs, is a focused, serious boy. He is strong now. Only occasionally does he show signs of the fractures he sustained as a kitten before he was rescued in California and sent to Seattle to heal and find his forever home. With his broad head and compact, muscular body, he maintains quite a presence. He is Max to the max, and plays the role of social facilitator because he never, ever misses a cue. 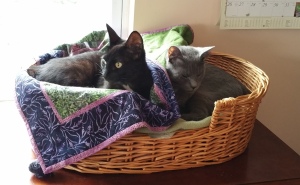 And then, there are our newcomers, the Whidbey Island cats, both former ferals, who made themselves at home immediately. Jasper, he of handsome grayness and crossed eyes, is enamored of Sam, and their friendship has bloomed. We sometimes slip and call him Siberia. He is a dear, quirky cat, willing to fill the hole left by another gray cat who was almost as long, lean, and loquacious as he. Valentine, our only girl, is a charming little one. She sees one of her humans approach, winks and blinks, tilts her head, and flops for tummy rubs. She and Max have a crush on each other. It is very sweet how this has all worked out. And just so no one worries, we still find Sam and Max cuddled together, too. No exclusivity in this household.

A year later, our hearts are filled with memories and gratitude for this fine family of ours.

There are days I wonder how we got so lucky. Even with the inevitable ups and downs of life, we have countless gifts, and more than enough to share.

In these moments of reflection, I hear words that linger from a difficult discussion I had with a friend when I started work at an animal shelter years ago. “How,” she asked, “Can you justify investing so many resources in animals when humans struggle to survive?” I answered as best I could, but the question haunted me. I used to think of it each time I donated to a pet food drive, or wrote a check to a rescue. I’d like to say that my contributions to other causes are equal, but most years, they fall short. Does that make me an uncaring person? I’ve wrestled with that for a long time, and I know I am not alone.

Over time, as I have worked with both humans and animals in need, a larger truth has emerged: genuine compassion knows no bounds. During my years as a humane educator, I learned that when young children are taught to value animals, they are more likely to become compassionate adults. The reverse is painfully true as well. I remember presenting in classrooms and hearing horrific stories about how animals were treated in some children’s homes. I always shared this information with teachers afterward, and more often than not, they were already aware of other manifestations of domestic violence in those families. The stories prompted family advocates to look closer and intervene if necessary. I hoped that the cycle of violence could be broken there, and that these children could heal from what they had seen and experienced. Without that healing, the violence would most likely enslave another generation.

I am not saying that caring about animals, or supporting organizations that do, is enough to change the world. But it is a valid starting point. If we can love an animal, we have hearts. If we have hearts, we can open them to other people as well. Sometimes the pain of living with open eyes and open hearts is overwhelming, but the more we exercise our compassion, the stronger we get, and the more we can take on.

“Woven into our lives is the very fire from the stars and genes from the sea creatures, and everyone, utterly everyone, is kin in the radiant tapestry of being.”
-Elizabeth Johnson
Over the last few months as more and more refugees have fled their war-torn homelands, I felt a level of despair I did not fully understand until recently. In September, after receiving results of a DNA ancestry test, I began to unravel a mystery. My mother and grandparents escaped from Hungary at the beginning of World War II after my great-grandfather was shot to death in a breadline when the Nazis entered Budapest . They fled to England, and waited for nearly two years until they could get safe passage to the United States. I grew up hearing stories about the war: the frozen bodies my aunts stepped over trying to get soup to starving friends on the other side of the Danube; the air raids in England that haunted my mother every time she heard sirens; and the eery silence of ships crossing the Atlantic in the dark of night to get people safely to Ellis Island.

I took those stories in, empathically feeling the terror that prompted my family to seek safety. And still, I knew there was more. In grade school, I read Anne Frank’s memoir and learned about the Holocaust. I asked my mother if our family was Jewish. No, she said. She reminded me every time I asked that her mother, my only American born ancestor, was of Irish heritage and a devout Catholic, and her father was a Lutheran. I pushed for more information as I got older, but could never get it. The vaults were sealed.

As a child, I had many Jewish friends. Then, as a teenager, I found safe haven with a family who survived the Holocaust. They were Orthodox Jews who welcomed me into their home day or night, no questions asked about why I needed shelter. I learned about their traditions, savored food from their kosher kitchen, and was always included in lively political debates at Shabbat dinners. Their humor and compassion helped me make it through difficult times.

More than once, my chosen family told me that I seemed like another of their children. Was I sure my family wasn’t Jewish? I wondered, too. In college, I pondered conversion, and wore a Star of David with a small cross in it. As an adult, I chose to walk my own spiritual path, but have for years lit candles at Hanukkah. Dear friends have gifted me with mezuzahs to hang by my doors. Art pieces filled with prayers, they have moved from home to home with me, and are there for us to touch now as we go in and out of our house.

When I was notified that my DNA results were available, I took a deep breath and looked. More a validation than a surprise, they revealed the truth. My ancestry is 25% Ashkenazi. Until I can reconstruct my family tree, I will not know when my grandfather’s family converted to Christianity. I can guess that it was between the wars when the world became increasingly dangerous and thousands of Hungarian Jews made the wrenching decision to change their identities.

My immediate family escaped. They were refugees, part of the diaspora, those fortunate ones who got out while they could to find somewhere safe to live. As I do my research, I will no doubt uncover the names of family members who did not get out alive. I think of my chosen family, with numbers tattooed on their arms, whose parents perished in the camps. And whose cousins may have been on the boat of refugees who were turned back when they reached America.

Every generation has been challenged to deal with waves of refugees. And every generation has had members who turned boats back, and refused to acknowledge the humanity of people in life-or-death situations. In turn, they abandoned their own humanity.

Right now, it is important to remember that in each generation, there have also been those who reached out to help in extraordinary ways. They were the quiet heroes who took enormous risks to get slaves to the underground railroad, transport Jews to safety, airlift orphans out of Viet Nam. They were not able to change the course of history, but they made a difference.

And just as significant have been the cumulative contributions made by everyday heroes who help out in ordinary ways. In our current situation, with a world coming apart at the seams, we need more than ever to reach out however we can. That begins with overcoming our fear of strangers. A current Facebook meme says it all.

What to do if Syrian refugees relocate to your neighborhood:

Bring them food, clothes, cooking utensils,
hygiene items, books, toys, or shoes.
This is probably what they’ll need most,
apart from your friendship.

“We only have what we give.”
-Isabel Allende

Last Thanksgiving, I prepared to celebrate my 60th birthday after a year marked by loss and grief As I have since childhood, I found solace in animals, and in people who care passionately about animals. My beloved partner walked every step of the way with me to that significant birthday, and to this next one, and I will be forever grateful for her patience, understanding, and love. I am thankful to all of my two- and four-legged friends who helped me keep my weary heart open as I started a new decade. I ask all of you to be extra kind to each other in these times of great challenge and opportunity. Our future depends on it. May we all find ways to widen our circles of compassion.