A Tale of Two Mothers

One cat just leads to another.  ~Ernest Hemingway

Yes, it is ironic to start a Mother’s Day blog with a quote from Ernest Hemingway.  I am sure many people referred to Papa as a “mother” during his life, and he most likely deserved it.  He was a troubled, tough guy, with a big soft spot in his heart for cats.  A friend recently returned from the Florida Keys with stories about Hemingway’s house, now a museum, and home to over 40 cats, descendants of Snowball, the polydactyl kitten given to the author by a sea captain over 80 years ago.  Without me even having to ask the question, my friend explained that there was a spay/neuter program in place.  Females have one litter, are then spayed, and the original line continues.

Since that conversation, I’ve thought about how many cats a single, unspayed female produces.  A look online yielded some wild numbers, up to 400,000 if all her offpring are also reproductive.   Snopes  debunked that total, citing a feral cat colony study done by the University of Washington’s Math Department:

“Here are the assumptions used for the population projection: One female cat gives birth to six kittens per year. Kitten gender is 50 percent female, and only 25 percent of kittens survive to reproductive age. All surviving female kittens become adults and reproduce with the same birth and kitten mortality rates. If no adult cats ever die, how many cats/kittens would there be at the end of seven years? One female cat and her offspring could produce between 100 and 400 cats by the end of seven years.”

Given that cats can have multiple litters in a year, the estimate seems low, but still a nightmarish statistic for those contending with overpopulation.  Cats can become pregnant at a mere 6 months, when they are still kittens themselves, which is why progressive shelters spay and neuter as early as 2 months of age.  If they are not already strays, many pregnant cats are turned out of their homes because people don’t want to deal with kittens.  Not that long ago, humans did the same thing to our own.  Every town has old buildings that were euphemistically called” homes for unwed mothers,” and in some places in the world, pregnant women still deliver their children in exile from their communities.

If a feline mother is lucky, she is taken in by concerned people who either foster or find a rescue organization to care for the cat and her kittens until they can be adopted.  In my last post, I wrote about the opportunity that Purrfect Pals and Foster Dad John Bartlett have given us through the Kitten Cam.  In the comfort of our own homes, we can watch a mother cat and her kittens, knowing that their stories will end happily when they all find their forever homes.

And now, the stories of 2 cats I want to honor this Mother’s Day.  The first is rather famous.  Named for the Sigourney Weaver character in Alien, Ripley is a slim and elegant cat.  Found as a stray and taken to a shelter, she ended up at Purrfect Pals, where she gave birth to 5 kittens. 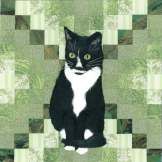 In John’s words, “Ripley doted on her kittens constantly when they were newborns, always providing them with a warm belly to feel safe with and to nurse. Her fans remember her fondly for her trademarked wide-eyed look every time she heard any kind of noise that couldn’t be 100% identified.”  Ripley won the hearts of thousands of Kitten Cam viewers, and we held our collective breath on adoption day as her kittens left one by one, and Ripley patiently waited.

The wait was worth it.  In the afternoon, John posted a message to tell us someone was on the way to save the day, and later, he shared a picture captioned “Ripley with her gentleman.”  As it turns out, Ripley has a whole family, with 2 loving people, and 2 other cats who have accepted her into the fold.

And onto the quilt I made her.  Ripley will represent the Kitten Cam mamas in the 13 Cats Project, and indeed, her story is a fairytale, from the lonely streets to a loving home.

Another mother who will be featured in the project still awaits her forever home.  Glorianne is a Himalayan, recently rescued from a breeding facility where she had been regularly bred for a decade.  That means Glori had at least 10 kittens a year, probably close to one hundred before she was finally spayed by Purrfect Pals.   She was surrendered along with 2 breeding males, Gordon and Gunther, who are about her age.  All of them spent their lives in individual cages, handled only when they were bred, but otherwise lacking any interaction with people or other cats.  Without  proper socialization, and in poor condition when they arrived at the shelter, their adoption prospects looked bleak.

Glori and Gunther on their quilts

Enter Purrfect Pals, and their relentless belief in every cat in their care.  Glori, Gordon, and Gunther spent the next few months pampered by foster mother extraordinaire Connie Gabelein, Executive Director at Purrfect Pals. Connie  lured the three Gs out of hiding with countless cans of smelly food.  She slowly gained their trust, and they became more confident.   Last weekend, they were introduced to the world at the Average Joe Cat Show, and are now available for adoption at the Issaquah Petco.  All three have their quilts already, each stitched from William Morris reproduction fabrics in different color schemes.  I figured that if ever a group of cats deserved dignified quilts, it was the Gs.  As soon as they find their forever people, I will do their portraits, and finish writing their stories.

So, back to the Hemingway quote.  I admit to using it a bit out of context.  Papa didn’t intentionally refer to cat reproduction, although he was surrounded by unspayed females, one generation leading right into the next.  My interpretation of his words is this: when cat lovers invite one feline into our hearts and homes, there is inevitably room for more.  Ripley’s family found that open space.  It is my fervent hope that Glorianne, Gordon, and Gunther find their people soon.  Even more than that, I hope that everyone will realize the importance of adopting from rescue groups and shelters, and that in time, no other cats will be bred for profit.  On this Mother’s Day, let’s make a special place for all the mama cats like Glori who richly deserve a loving home.

Glori, ready for her forever home