Corvids of a Feather 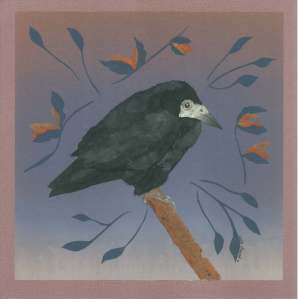 When my partner and I moved into our house in the dead of winter six years ago, we quickly became aware of two sad crows in our back yard.  The male’s vision was occluded with a film over one of his eyes, and he struggled to navigate and feed himself.  His mate had a deep cut across her throat, most likely from eating out of a sharp-edged can.   We concluded that these pathetic birds were old and in their final season of life.  With pity, we fed them cat food and peanuts, expecting each supper to be their last.

By spring, they looked better.  As the male’s eye improved and he started to caw with more energy, we named him Roarke.  The female’s neck healed, and with better nutrition, she transformed into the sleek beauty we call Giselle.  They thrived during the summer, and by the time we celebrated our first anniversary in the house, our resident crows were healthy and content.  The next spring, they produced offspring, as they have every year since. Roarke and Giselle are part of our extended family, and I can say they have taught me more about birds than any class I’ve ever taken.

People seem to fall into 2 camps: either they love corvids, or they loathe them.  It has been one of my greatest pleasures to become friends with an author who writes from deep inside the first camp. Esther Woolfson lives in Aberdeen, Scotland with a rook named Chicken and a crow known as Ziki.  When I say “lives with”, it is not in the way I live with Roarke and Giselle.  Chicken and Ziki are rescued corvids who share Esther’s home with her.  Her book Corvus, A Life with Birds, is a lively account of a rook nesting under the dining room table, an injured crow habituating to people, and the daily interaction of humans and birds.

Esther is also a superb natural history writer.  Her newest book, Field Notes From a Hidden City, is about the relationship between the urban and the ‘wild’, between the people who live in cities and the most common species who share our living space – pigeons, spiders, rats, squirrels. It touches on themes of biology, climate change, phenology and the ethics of human-animal relations. Field Notes has just been released in Scotland this week, and Esther is already getting positive critical response.   Watch for release in the United States later this year.  You can get more information on her website.

And despite our long-distance, electronic friendship, Esther and I are both involved with each other’s bird families.  A few years ago, I had the privilege of creating a paper collage portrait of Chicken.  And Esther mentions Roarke and Giselle in her new book.  Birds of a feather always find ways to flock together.

What camp do you inhabit?  Crow/raven/jay lover, or not?  Share your stories here, because everyone has a corvid tale to tell.