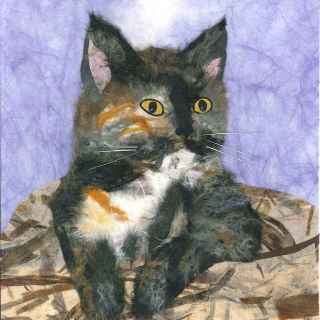 Hazel was one of the 4H litter fostered by Purrfect Pals volunteer John Bartlett. In John’s words: “Hazel was one of a litter of four and the most social of the lot. Fearless in every way, there was no place she wouldn’t go and no place that wasn’t explored from one end to the other, frequently. Two of her litter mates were semi feral and her quick purr played a crucial role in helping them to relax and eventually socialized and adopted.” Hazel’s portrait hangs in John’s kitten room.